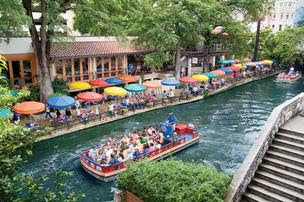 San Antonio's famous River Walk is just one of the attractions that lures millions of visitors to the city annually.

San Antonio has been recognized as one of the "52 Places to Go in 2015" by the New York Times. The Alamo City ranks No. 36 — right behind Shikoku, Japan, and just ahead of San José del Cabo, Mexico.
Among the reasons why San Antonio made the list, according to the publication were the city's "new attractions and renewed cultural depth."
The New York Times ranking points to an expanded River Walk and the "path-side development boom" that large investment has created as another reason why San Antonio stands out among other cities across the globe.
Milan and Cuba are ranked No. 1 and No. 2, respectively.
Posted by Robert and Gloria at 8:50 AM No comments: